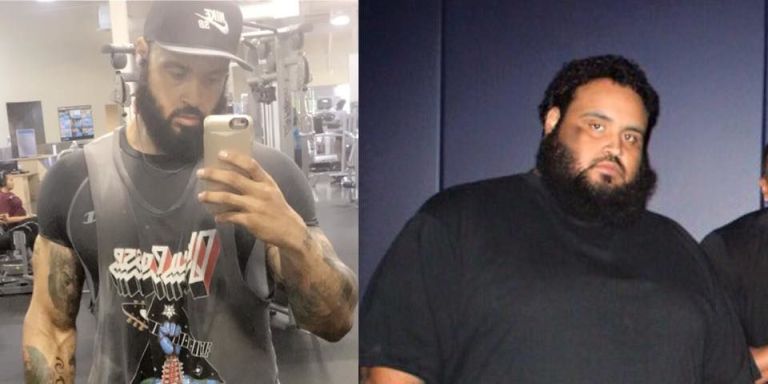 Pasquale “Pat” Brocco, 31, was called “Fat Pat” his entire life. But now, he prefers the nickname “Possible Pat” because of his incredible weight loss journey and his unique fitness plan that helped him lose more than 300 pounds: walking to and from his local Walmart.

Three years ago, a doctor warned Brocco that his weight, which was then 605 pounds, as well as his high blood pressure and high cholesterol were extremely dangerous, according to ABC News. Brocco snapped a photo of himself after his appointment, and realized what his body looked like.

“My stomach was down to my thighs. My chest was hanging down here,” Brocco told ABC News. “I was disgusted.”

To succeed the process must become a rhythm! Rhythm is something done repetitive, so the process must be repetitive! We have to be consistent and let it become in our nature! This is for all good and bad habits, something become a habit when done constantly and repetitively, so you can either do the things that will make you successful or the things that will make you fail the choice is yours! I choose success and even tho failure will be part of it I will let the process to success become my rhythm! Never forget to believe you can and do not I repeat do not let negativity control your mind positive thoughts only!!! Sometimes my pictures are motivation but sometimes it’s my caption this isn’t just a fitness post it’s a life post #weightlossjourney #transformation #tbt #workharder #success #weightloss #focus #fatloss #inspiration #inspire #fitnessmotivation #motivation #gymmotivation #consistency #lifestyle #healthychoices #eatcleantraindirty #cleaneating #gymlife #gymmotivation #neverquit #nevergiveup #fitfam #believeinyourself

Determined to make a change, Brocco decided that every time he was hungry, he would walk to the closest Walmart near his Avondale, Arizona home, which was one mile away, and then walk back home to eat. “You walk to Walmart three times a day, and you end up walking six miles,” Brocco said to ABC News. “It’s amazing because I never walked six miles in my life, and I was doing it every day.”

LIFE is like a Squat 🏋🏼‍♀️ When life brings you down, you have to pick yourself back up 🙌🏻 & even when your super down and low, those are the times you grow even more 💯 – Staying Hydrated with my Pink Gallon Gear 👀 you can use my discount code to get 💦 POSSIBLEPAT – @gallongear

Brocco changed his eating habits by loading up on healthy food—like vegetables, meat, sweet potatoes, steel-cut oatmeal, and quinoa—while cutting out junk food. He also modified his diet along the way as he discovered what foods were hurting his weight loss goals. “Once I figured out dairy was my downfall, I took it out of my diet, and instantly I started losing weight again,” he told ABC News.

TAG SOMEONE WHO MOTIVATES YOU 💎 – There’s a story behind every single person. There’s a reason why they’re the way they are. Before you judge another person, think about the unknown, think about how much that person has or others have struggled just like you. Judging someone because if they’re overweight, skinny, they dress funny compared to you, doesn’t define them. It defines you. – – Their is only 1 simple rule to life. If you do NOT step forward, you will always be stuck in the same place. – – #teambodybuildingcom #bestself #transformforlife

When I’m with the boys I talk shit not to discourage them but to push them! We are competitive! Different strokes for different folks! I treat everyone differently because I know somethings that work for some people won’t work for others! If your a motivator / trainer learn your clients!! #FullbodySundays 4rounds 1 min break at the end of each round! •20 deadlifts •20squats •20powercleans •sprint for .15 miles •20 crunches •20 push-ups •20 dumbbell rows!! Repeat heavier weight 15 reps Repeat heavier weight 12 reps Repeat heavier weight 8 reps And I know I didn’t get low lol I was done after 3 rounds #sundayfunday #workharder #fitfam #weightloss #weightlossjourney #fatloss #motivation #inspire #fullbody #traindirty #lifestyle #nevergiveup

Within two years, he lost 200 pounds and began working out in a gym. Today, Brocco is a full 325 pounds lighter and wants to become a body builder, he wrote on his GoFundMe page. Just this week, he underwent surgery to remove the roughly 30 pounds of excess skin, which he paid for through a GoFundMe and with a discount from his doctor.

And now, “Possible Pat” is chronicling his healthy living, work outs, and meals through social media, making for some serious Instagram #Fitspo.

But his most important role at the moment? Being a role model for his one-year-old son. “I’m setting an example for my son so he can be Possible Pat, too,” Brocco said to ABC News.