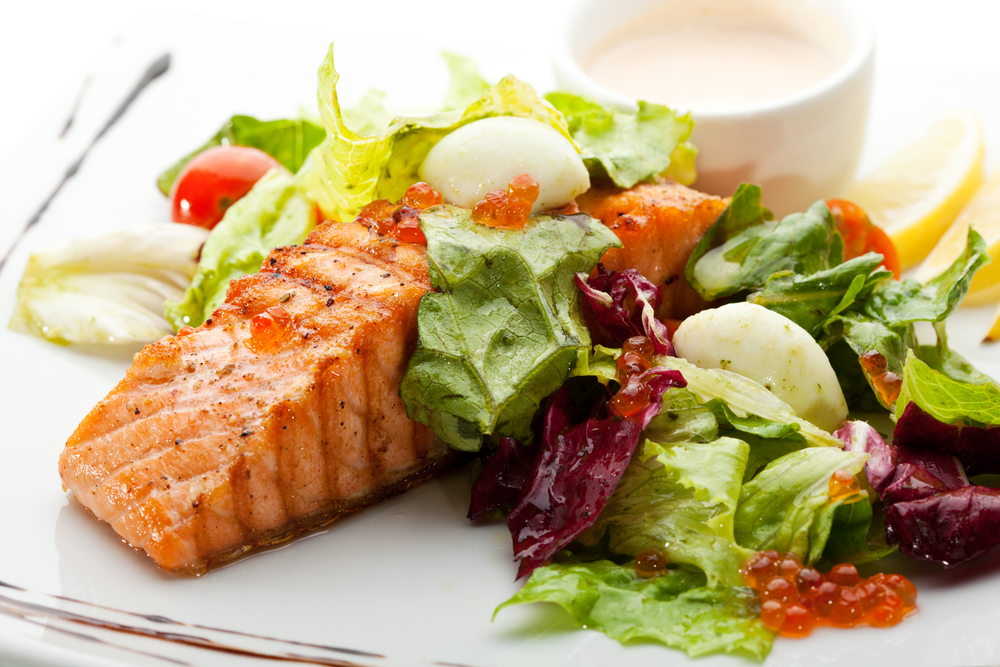 Ever wondered how low carb diets got its popularity? Health and fitness writer P. D. Mangan has an answer.

If you want to lose weight, you have a number of choices. The most popular is to cut calories and eat a low-fat diet. A way that’s becoming more popular, because it works much better, is to cut carbohydrates. Here we’ll take a look at scientific proof that a low-carb diet is best for weight loss.

The biggest impediment to losing weight on a low-calorie diet is hunger. If you voluntarily reduce calories while eating the same foods, you get hungry, as is to be expected. Your body defends its weight, i.e. it has a set point, and makes you hungry if your weight moves away from the set point.

On a low-carbohydrate diet, you merely cut the amount of carbohydrates in the diet, and in most studies looking at low-carb diets, the dieters ate as much as they wanted. Only carbohydrates were restricted. Cutting carbohydrates lowers levels of the hormone insulin, which signals the body to store fat, and which is responsible for setting the body weight set point. The result is nearly effortless weight loss.

In the first study we’ll look at, a group of obese women were randomized to either a low-fat, low-calorie diet, or a low-carbohydrate diet that was not restricted in calories, and followed for 6 months. Weight loss result in the chart below.

The low-carb group ate 20 g of carbohydrate daily, but were allowed to increase this to 40 to 60 g after 2 weeks, so long as they remained in ketosis as shown by urinary testing. The low-fat group was restricted in calories by 30% and ate about 55% of their calories as carbohydrates.

Despite the fact that the low-carb group could eat as much as they wanted, they spontaneously reduced their calorie intake to about the same as the low-fat group. That shows the power of low-carb in reducing hunger and changing the body’s weight set point. And they still lost more weight, an average of 7.6 kg, than the low-fat group, at an average of 4.2 kg.

You can even eat more calories and still lose weight

The second study concerns weight loss in obese teenagers. A group of adolescents, average age 14, were assigned to either a low-carb diet or a low-fat diet.

The low-carb group was instructed to keep carbohydrates at less than 20 g a day for the first 2 weeks, but increasing to 40 g a day in weeks 3 through 12. They could eat as musch as they wanted.

The low-fat group was instructed to keep fat at <40 g a day. They also could eat as much as they wanted.

Here are the results. 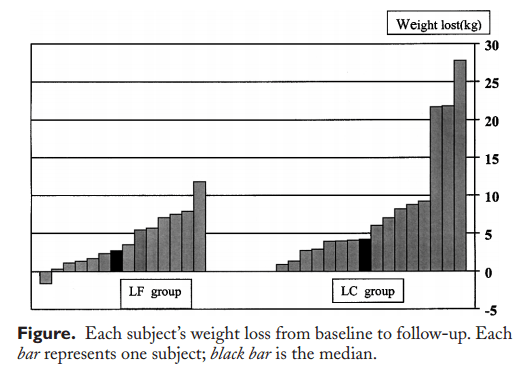 You don’t even need to reduce carbohydrates much

The third study compared a low-carbohydrate to a low-fat diet in severe obesity. These people had a high prevalence diabetes or metabolic syndrome.

The low-carbohydrate group was instructed to keep carbs at 20 g a day. However, they didn’t. They could eat as much as they wanted.

The low-fat group was instructed to keep fat at 30% of calories, and to reduce their calorie intake by 30%. 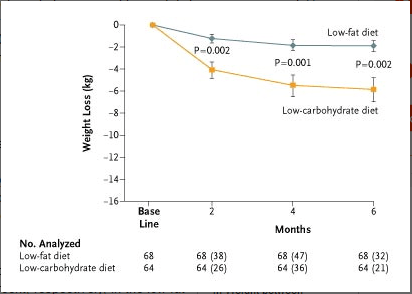 The low-carb group lost 5.8 kg after 6 months, the low-fat group 1.9 kg. (13 pounds vs 4 pounds.) The low-carb group spontaneously reduced their calorie intake, so that the 2 groups ate about the same number of calories, again showing the power of reducing hunger and body weight set point.

Notably, the low-carb group wasn’t very compliant, and they only reduced their carb intake to 37% of calories at 6 months, vs 51% for the low-fat group. Yet they still lost more weight.

The low-carb dieters could eat as much as they wanted, so long as they restricted carbohydrates to 20 grams daily initially, but increasing to a maximum of 120 grams. 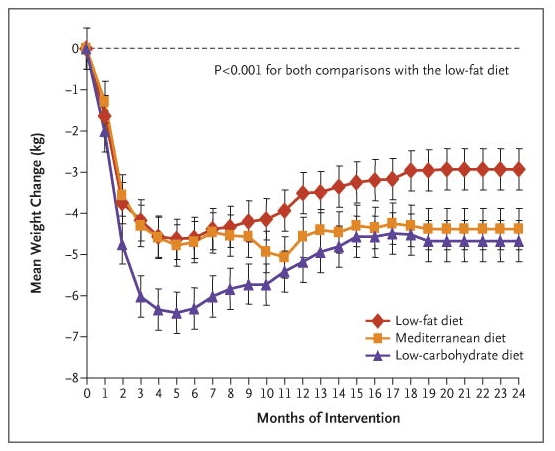 Once again, low-carb is a clear winner. Low-fat lost 2.9 kg, Mediterranean 4.4 kg, and low-carb 4.7 kg. The low-carb group still ate a whopping 40% of calories as carbohydrates, although that was down from 51% at baseline, representing a drop of 120 grams of carbs daily.

Noteworthy is the increase in weight after the first few months of weight loss, which was greatest in the low-carb group. That group actually increased its carb intake slightly. Another explanation might be a lower metabolic rate and/or less exercise. the low-carb group did decrease the amount of exercise between 6 and 24 months; the low-fat group increased exercise.

We’ve seen above that several studies have found that low-carbohydrate diets are superior for weight loss. have I cherry-picked the studies? Nope.

Dietary Intervention for Overweight and Obese Adults: Comparison of Low-Carbohydrate and Low-Fat Diets. A Meta-Analysis. This study concluded:

This trial-level meta-analysis of randomized controlled trials comparing LoCHO [low-carbohydrate] diets with LoFAT [low-fat] diets in strictly adherent populations demonstrates that each diet was associated with significant weight loss and reduction in predicted risk of ASCVD events. However, LoCHO diet was associated with modest but significantly greater improvements in weight loss and predicted ASCVD risk in studies from 8 weeks to 24 months in duration. These results suggest that future evaluations of dietary guidelines should consider low carbohydrate diets as effective and safe intervention for weight management in the overweight and obese, although long-term effects require further investigation.

What to eat on a low-carb diet

Low-carb diets vary in the degree of carbohydrate restriction. One scheme that I used in my book Stop the Clock was the following:

(our Macronutrient calculator has all the above presets included)

As we saw in this article, virtually any degree of carbohydrate restriction is beneficial. But, the more you restrict carbs, the better your weight loss is likely to be.

Timothy Noakes, M.D., a noted advocate of low-carb diets, recently published an article, Evidence that supports the prescription of low-carbohydrate high-fat diets: a narrative review. In it, he listed the following foods as being “green-lighted” for a low-carbohydrate diet:

This list is meant for people who are insulin-resistant. If trying to lose weight, it would be a good idea to go easy on the added oils and nuts.

You should omit the following foods entirely:

For what it’s worth, I eat this way all the time. Most days my carb intake is probably 20 to 60 grams, some days rising to 100.